Apple VR and AR glasses: weigh less than the iPhone and are operated without controllers 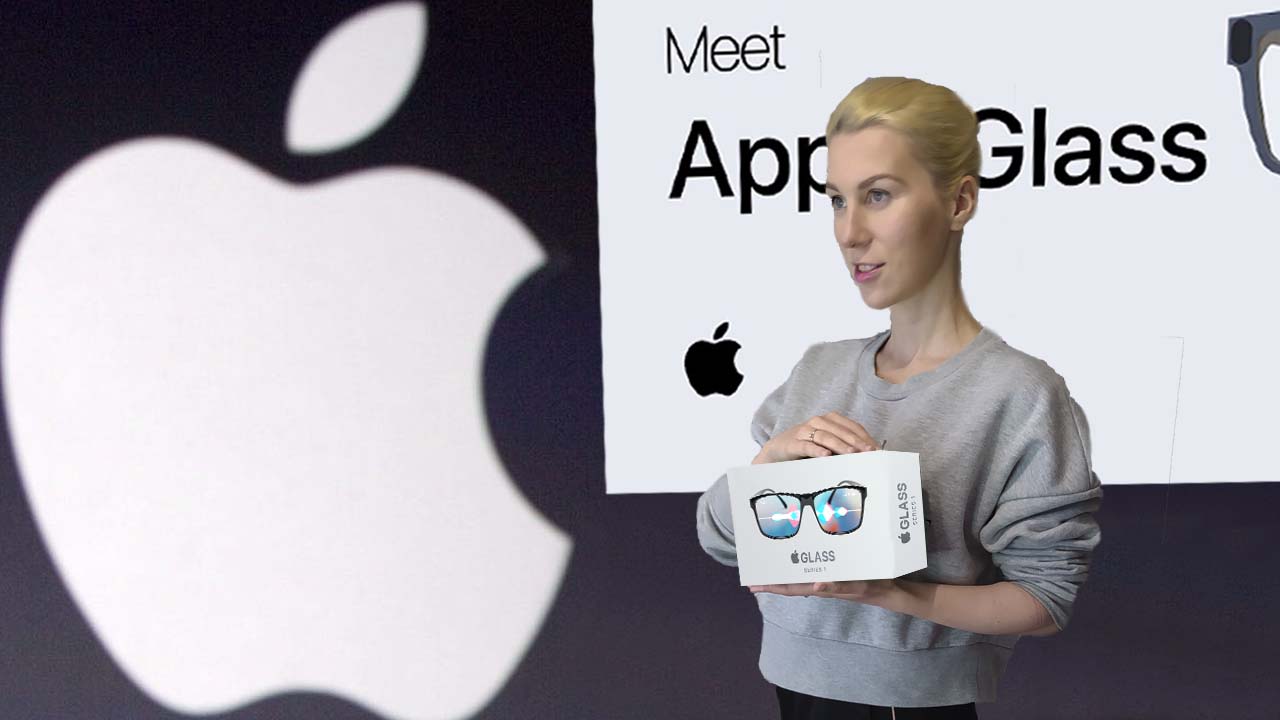 I earned my first money when I was 14 years old. Typically, I received them not for washing cars or distributing leaflets, but because of my main passion and favorite business - stories about technologies.

I wrote articles about new devices in Mobime magazine(which, by the way, still exists). The editor thought I was 18 years old and gave me gadgets to test. I was so excited about one of them that I dropped it full of excitement right in front of the company representative.

Of course, all of the above mentioned is an introduction to my main story. The fact is that I, as a teenager, was incredibly lucky – it was at this time when Apple company threatened to release its smartphone, and I, knowing English quite well by then, translated kilometers of foreign articles about the new devices of the 'Apple' company.

I remember there were so many rumors, speculations, leaks – of course, purposeful, and a trembling excitement around these devices!

And then it just released. And the world was no longer the same – I tell you this as a former owner of two PDAs.

I've puzzled and puzzled all over again about what made the whole world choose Apple? And it seems to me that this is still design. Design, personified in technology, and making them look easy and smart.

And of course, the rejection of the stylus in favor of controlling the touch screen with your fingers, the intuitive interface and how fast it worked.

Apparently, in the virtual and augmented reality industry, Apple should also make a sensation thanks to its delicate approach to design, well-developed marketing and the ability to create a whole show out of its product.

One of the images of the future device, pictured according to leaks from Apple

What will Apple's virtual and augmented reality device look like? Let's think together, based on indirect signs and information leaks.

Judging by the number of patent applications filed by Apple regarding virtual and augmented reality, the company has been planning to release its own similar device for 10 years already. Interest in the topic of augmented and virtual reality has grown significantly recently, the ARKit project is showing great success, and Apple itself is buying up startups and specialists who are engaged in VR and AR like hot cakes. So, the aspirations of the "apple giant" in this direction may be more serious than skeptics believe – up to the point that in 2022 we will see VR / AR or XR glasses from Apple.

Here's just one example – Dan Riccio, senior vice president of hardware development at Apple Inc, moved to a new position in January 2021. Now he's overseeing work on an AR / VR headset. Riccio is an excellent specialist, and Apple probably has high hopes for this division, since it sent one of its best employees there.

Apple company said it is working on several concepts of virtual and augmented reality glasses, as engineers are looking for the "most attractive way of using" for such a device. A lot of rumors indicate that Apple's first product will be smart glasses with augmented and virtual reality functions.

It is possible, by the way, that there are two prototypes – according to rumors, the company is working on a full-fledged virtual reality headset, more similar to something like modern Oculus Quest 2 glasses, and on "smart" glasses, light and elegant, which will preferably be used for augmented reality – something like Microsoft Hololens, but more.

By the way, if most analysts first predicted that Apple would focus exclusively on glasses with the augmented reality function, then it became clear that there would still be two devices.

Bloomberg reported in January 2021 that the initial device will still be virtual reality glasses with a mixed reality function, which will be as a niche predecessor to the more ambitious AR device, which will be released a bit later.

Perhaps before the launch, Apple will introduce a mixed reality headset at a private event that is expected to take place in 2021 – it is unclear when exactly, but most likely in autumn.
According to rumors, the headset from Apple will be similar to the virtual reality glasses Oculus Quest from Facebook, but will cost much more and differ in an even more stylish and lightweight design.

Apple's virtual and augmented reality glasses are likely to feature two high-resolution 8K displays and cameras with eye-tracking functionality. With them, users will be able to "see other people standing in front of and behind virtual objects" - much like Microsoft's Hololens augmented reality headset. The headset will be able to display surfaces, edges, and room sizes with "greater accuracy than existing devices on the market." Apple's glasses will have a more advanced display and a chip that is even faster than the M1 processor in the 2020 Mac.


The Information reported in February that the new headset will feature more than a dozen hand-tracking cameras, separate cameras for monitoring the outside world, and the entire design will block peripheral vision to prevent light from entering the user's field of vision. The display can also have a built-in screen facing outward, so that the user can show others what is happening in his glasses.

Kuo also said that Apple's headset will feature an advanced gaze tracking system used to provide an intuitive visual experience that seamlessly interacts with the external environment, as well as a more intuitive control system, including using the eyes.

Apple is working on several methods to control the virtual reality glasses, including a small device that reminds a thimble that can be worn on the finger. The headset will also be able to respond to eye movements and hand gestures. Among other things, Apple tested input using its Siri voice assistant.

In general, it sounds like the company - to get rid of unnecessary joysticks and remotes. Remember the legendary Jobs's presentation about the opposition of the iPhone to the then PDA - "Nobody wants stilus!" - "No one needs a stylus!"

It is not surprising that Apple continues to follow this path, and the company is thinking about how to completely get rid of the" extra " elements in the management, limiting itself to tracking the hands, eyes and body.

Current prototypes of the headset are said to weigh between 200 and 300 grams, but Apple is aiming to reduce the final weight to 100-200 grams. If the company manages to overcome the technical difficulties, its virtual reality glasses will be lighter than all existing VR devices. Imagine that your Apple VR glasses will weigh less than the popular Oculus Quest 2 glasses (503 g), Microsoft Hololens (645 g) and Valve Index (809 g). In fact, these glasses will be even lighter than the iPhone 12, which weighs 164 g. The headset will be portable with independent power and memory. It will provide an "exciting experience" that surpasses the currently available VR devices. For sure, Apple's VR glasses can also be integrated with Apple TV + and Apple Arcade.
The augmented reality functionality for the headset is "more limited," and while the release is scheduled for 2022, Apple has supposedly faced several barriers in development and has "conservative" estimates of the device's sales. Apple plans to sell about 180,000 units, which is in line with the company's expensive devices, such as the Mac Pro.

Apple's VR headset is expected to be much more expensive than most other companies' headsets, The Information reports that Apple has discussed a price tag for the headset at around $ 3,000.

Interestingly, Apple is supposedly working on augmented reality glasses even longer than on virtual reality glasses. The device will be similar to regular glasses, where both lenses are equipped with displays that you can interact with using gestures. Apple allegedly plans to use "ultra-modern " OLED micro-displays supplied by Sony for its augmented reality glasses. Sony's OLED microdisplays feature ultra-fast response, ultra-high contrast, wide color gamut, high brightness, low reflectance, and built-in drivers for a slim and lightweight design. They say that the glasses are equipped with a 0.5-inch display with a resolution of 1280x760 pixels.


There are a number of leaks that indicate that Apple is working on virtual and augmented reality headsets. For example, a controller that looks like a controller from HTC Vive Focus was detected. It is known that Apple tested the HTC Vive Focus for internal needs and development.
Apple is testing its AR hardware along with the Gobi app on iOS 14 and is actively experimenting with the capabilities that augmented reality provides. One example is a bowling game that is run at a certain pedestrian crosswalk in Sunnyvale, California.

The code in Xcode 11 confirms Apple's work on the AR headset. There are links to test devices with a code name, as well as to the frameworks and the system shell related to these devices. The links suggest that Apple is developing support for a facial AR interface similar to Google's Daydream.

In November 2017, Apple bought Vrvana, a company that developed a mixed reality headset called Totem. Vrvana technology could potentially be used in a future Apple headset. Apple followed the purchase of Vrvana with the acquisition of Akonia Holography, a company that makes lenses for AR smart glasses.

Rumors also suggest that Apple could incorporate its augmented reality research into its current automotive project as part of an automotive software system.
And what do you expect from Apple? What do you think Apple's VR / AR glasses will look like?